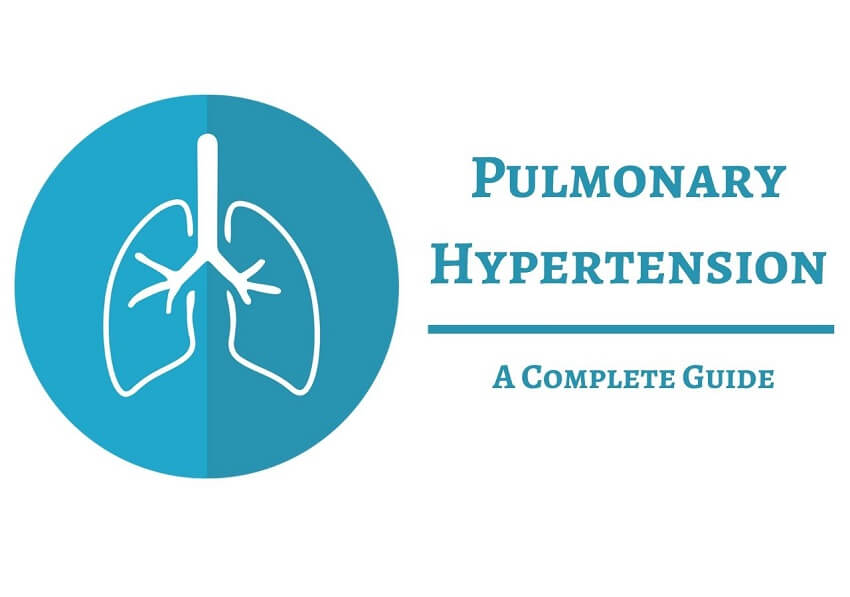 Do you know that if left untreated, the average life expectancy of a pulmonary hypertension patient is approximately 3 years from the occurrence of symptoms?

Another cause of worry is that 72% of the pulmonary hypertension patients are diagnosed with the disease in advanced stages.

So, let’s begin with…

What is Pulmonary Hypertension?

Now, you must be thinking is PAH different from PH?

Yes, it is. PH is used as a general term to describe high blood pressure in lungs which can be due to any cause such as sleep apnea, blood clots in lungs, chronic lung disease, diseases of the left heart etc.

PAH or Pulmonary Arterial Hypertension, on the other hand, is a subgroup of PH. It is a chronic disease in which the arteries in the lungs are blocked, narrowed and destroyed. It occurs specifically when the pulmonary arteries get tightened or constricted that connects the right side of the heart to the lungs.

Due to this condition, blood flows slowly through your lungs, and your heart works hard to pump the blood so that it can easily go through your lungs. This results in the weakening of the cardiac muscle, and it makes the heart weak which might eventually result in heart failure.

Though PAH is a rare condition, it can affect both males and females of all ages and currently, there is no cure for this disease. Due to this, the early diagnosis of PAH is very important. If not treated on time, pulmonary arterial hypertension can slowly get worse and can be life-threatening.

At starting you won’t be able to judge the symptoms. In some cases, you may have no symptoms at all. Generally, the pulmonary hypertension symptoms develop very slowly which you may not be able to notice for months or even a few years. Symptoms become more intense with time as the diseases progress.

The symptoms of pulmonary hypertension include:

To properly diagnose pulmonary hypertension, the patient needs a complete physical examination, medical history and detailed description of their symptoms to make the correct diagnosis.

The diagnosis process comprises of the following:

Physical Examination – While carrying out a physical examination, the doctor checks for abnormal heart sounds like a systolic murmur of tricuspid regurgitation, a loud pulmonic valve sound, or a gallop due to ventricular failure. The doctor examines the abdomen, legs, and ankles for fluid retention and the jugular vein in the neck for enlargement along with nail beds for the bluish tint. Doctors also try to look for underlying disease signs, which might be the cause of PH.

Blood Tests – Several blood tests can be used to determine the type of PH you are suffering from such as:

Doppler Echocardiogram – Under Doppler Echocardiogram method, high-frequency sound waves are used to determine the functioning of the right ventricle, measure the flow of blood through the heart valves, and then calculate the systolic pulmonary artery pressure. The Doppler technology helps in determining the speed and direction of the blood flow by making use of the Doppler Effect.

Right Heart Catheterization – Your doctor might suggest you to go for right-heart catheterization if your initial diagnosis points towards PH. It is considered as one of the most accurate tests for the diagnosis of pulmonary hypertension. In this test, a catheter (a thin rubber tube) is inserted in the patient’s groin or neck through a large vein. The catheter is then passed in the heart to measure the patient’s blood pressure on the right side of the heart and lungs.

World Health Organization (WHO) and the New York Heart Association have classified pulmonary hypertension into four stages which include:

Stage 1: Patients who have been diagnosed with the diseases but don’t show any symptoms, fall under Stage 1 category. It can only be identified through medical check-up. Under Stage 1, normal physical activity doesn’t cause any discomfort such as chest pain, fatigue, dyspnea etc.

Stage 2: Under Stage 2 pulmonary hypertension, some symptoms can be seen when you do any physical activity, but there are no symptoms when you are at rest.

Stage 4: In Stage 4, symptoms are clearly visible while you are resting and you will be facing regular problems and discomfort such as dyspnea, fatigue or right-sided heart failure if indulged in any physical activity.

So what causes pulmonary hypertension?

There are many causes of pulmonary hypertension. Broadly, the causes are clubbed into five groups by the World Health Organization (WHO).

WHO has classified pulmonary hypertension in five groups named as: –

WHO Group 2 – Pulmonary hypertension due to left heart disease

WHO Group 5 – Pulmonary hypertension due to blood and other disorders

Let’s discuss each group in detail –

WHO Group 1 refers to pulmonary arterial hypertension (PAH) which is caused when the arteries present in the lungs get narrowed or blocked.

There are several types of PAH including:

WHO Group 2: Pulmonary hypertension due to left heart disease

WHO Group 2 refers to pulmonary hypertension caused due to left heart disease. WHO Group 2 is the most common form of pulmonary hypertension and is caused due to prolonged problems with the valves on the left side of the heart. The left heart is not able to keep up with the blood returning from the lungs which causes a backup of blood and as a result raises the pressure in the lungs.

Is targeted treatment available for PH due to left heart disease? – No

WHO Group 3: Pulmonary hypertension due to lung disease and/or chronic hypoxia

The common lung diseases associated with WHO Group 3 include:

In this, the arteries present in the lungs tighten which forces the blood to go to those areas of the lungs that receive more air. This tightening of arteries leads to high blood pressure in the lungs.

Is targeted treatment available for PH due to lung disease or Hypoxia? – No

WHO Group 4: Pulmonary hypertension due to blood clots in the lungs

Clots are formed when the body suffers any bleeding or injuries, but if they are formed without an apparent cause, it can harm the lungs and heart. Pulmonary thrombosis is a condition in which the body is not able to dissolve the clots that are formed in the lungs that can block the pulmonary arteries. Due to this blockage, the right side of the heart has to work harder which increases the blood pressure in the lungs.

WHO Group 5 refers to pulmonary hypertension caused due to blood disorders or certain metabolic disorders. The main causes for WHO Group 5 PH are

These are rare causes which are not commonly seen among pulmonary hypertension patients.

Is targeted treatment available for Multifactorial pulmonary hypertension? – No

Though pulmonary hypertension can’t be cured, proper treatment can reduce your symptoms and condition significantly.

Here are several treatment options available for pulmonary hypertension the use of which might vary from cases to cases depending on the symptoms of the patient.

Vasodilators – Vasodilators relaxes and opens the narrowed blood vessels, and also improves the blood flow. Vasodilators are sent by an intravenous (IV) line attached to a small pump. Some of the most commonly prescribed vasodilators are epoprostenol (Flolan, Veletri), nifedipine (Procardia®), diltiazem (Cardizem®), and treprostinil (Tyvaso, Remodulin, Orenitram). Vasodilators are associated with some side effects including chest pain, jaw pain, headache, nausea, and diarrhoea.

Anticoagulants / Blood Thinners – Anticoagulants such as warfarin (Coumadin, Jantoven) are used to prevent the blood clots in arteries present in the lungs so that blood can flow freely through blood vessels. It is important to consider the bleeding complications in mind as this drug can put you at risk of bleeding, so consult regularly with the doctor while you are on anticoagulants.

Diuretics – Diuretics, also known as water pills, such as furosemide (Lasix), torsemide (Demadex), and spironolactone (Aldactone) are used to remove the excess amount of water from the body through urine which is known as diuresis. This reduces the extra load from the heart, reduces swelling, and eases the breathing process. Diuretics are also used to limit the fluid retention in the lungs, legs and abdomen.

Digoxin – Digoxin is generally prescribed by the doctor to pulmonary arterial hypertension patients who have atrial tachyarrhythmia. It strengthens the heart and improves its pumping ability so that heart can pump more blood easily.

Pulmonary Endarterectomy – It is an operation in which old blood clots are removed from the pulmonary arteries in the lungs. It is used in people with chronic thromboembolic pulmonary hypertension.

How to Treat Pulmonary Hypertension Naturally?

1) Pulmonary hypertension patients tend to retain water so they need to prevent their body from holding too much fluid. Too much fluid in the body gets accumulated in the legs, abdomen, and patients become uncomfortable to exercise or even move. Hence, it is better to avoid having more than 8 cups of fluid in a day.

2) Consume a limited amount of salt. Do not take above 2,000 mg of salt in a day as the body cannot get rid of the excess. Also, stay away from foods having a high amount of sodium such as chips, canned foods, and frozen foods.

3) Pulmonary hypertension patients should have a vegetarian or vegan diet, as these will make them feel better.

4) Pulmonary hypertension patients should practice some light exercises which can help build stamina and manage their breathing. However, patients need to consult with the doctor if they wish to start swimming. Patients with the right kind of exercise can walk more, breathe better, and feel better about handling their pulmonary hypertension.

Note: Patients should avoid lifting weights of more than 15 pounds.

5) Pulmonary hypertension patients should stay away from caffeine and alcohol. They should avoid tea and coffee.

7) Sleep issues are common for people with pulmonary arterial hypertension (PAH), especially in conditions such as sleep apnea which makes the breathing worse. Try to get adequate sleep to keep yourself energized.

Q1) What is the life expectancy of pulmonary hypertension patients?

Ans) Earlier it was observed that people having pulmonary hypertension have a life expectancy of up to 2-5 years but with proper care, diet, medication and lifestyle, you can survive up to 10 more years.

Ans) Yes, the pulmonary pressure increases at high altitude areas which can result in worsening of the condition.

Ans) Yes, you need to take extra care and precautions during winter as cold and flu generally aggravates in winter. It may elevate the blood vessels in the lungs which is not a good sign.

Q4) Which foods to avoid in pulmonary hypertension?

Ans) Avoid or limit the intake of salt, coffee, and alcohol. Also, stay away from oily foods and high carb foods.

Ans) It has been observed that pulmonary vascular remodelling in COPD is the primary cause of the increase in pulmonary artery pressure and is resulted from the combined effects of inflammation, hypoxia, and loss of capillaries in emphysema.

Feel free to ask your queries related to pulmonary hypertension below and if you liked the article, share it in your close groups.

Scroll back to top